So how is Jelly Bean?

I’ve been using ParanoidAndroid 1.92, a Jelly Bean ROM, as a daily driver on my I9100 for the past week, thanks to CM10 team, and D4rKn3sSyS over at XDA. There have been *almost* no issues so far. I’ve had some people asking how JB is different from ICS, and so I thought it’s time I post about my experience so far. 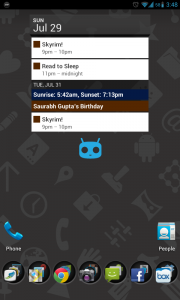 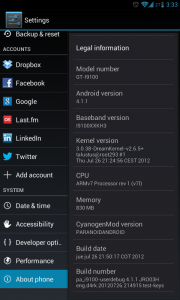 Given that it is still an experimental build, there might be more improvements in the pipeline, and if that happens, I’ll take the time out to post a second review (or update this one). So anyway, let’s move on to the first impressions.

The performance has been amazing even without the Project Butter implementation! It feels a lot faster than ICS. It has some flashy screen transitions, but on the whole, keeps the ICS look and feel which, in my books, is a win.

Google Now is a whole new ball-game. Now does not even require you to ask for things… All relevant information is all displayed as a stack of cards. In fact, Now is smart enough to know that I don’t need to know about the traffic on my way to work on the weekends.

Google Search now uses Google’s Knowledge Graph implementation. Add Voice Search to that, and we have a winner. With the instantaneous responses, it leaves even Siri biting the dust. Voice Search has a better, faster way of presenting information compared to Siri, though it does lack the functionality to add and edit calendar events and such (one of the new things coming in iOS6’s Siri.)

The revamped Notification Tray is out-of-this-world! We all know it provides the ability to display larger notifications, but there is no way you can imagine the impact of this small enhancement till you see it in action. Entire texts and emails can be read, screenshots and images can be previewed, calls made and ended, directly from the notification.

Offline Dictation is simply brilliant! You could easily type out entire emails using it, but to be on the safe side, it does require proofreading.

The Homescreen has been one of the key features of Android’s UI, and it’s great to see that even such a tried and tested system has got some major usability upgrades. Icons simply move out of the way (if possible), instead of giving the “not enough space” toast, making is infinitely faster to rearrange or customize the layout.

The Camera has seen some interface change as well. Now we can simply swipe left to get into the gallery. Pinch to zoom out of the picture on the screen, and you get into a quasi-film-strip view. Swipe all the way to the right, and you get back to the camera. The camera also shows focus state, so you know what’s going on while shooting photographs.

Things are not rosy all-around though. In my first two days with JB, I charged my phone 4 times—that’s a 12 hour life on an average—and I used to get at least twice that with ICS. After letting the ROM “settle” I have noticed better standby times, but as soon as the screen is on, the charge nosedives; in short, battery life disappoints. Given the functionality and performance, and keeping in mind that it’s only an experimental preview, I must say battery shouldn’t be your top priority. What are extended cells for, anyway! 😀

On the whole, JB is just an incremental update, but I’m quite hopeful about how things are turning out. Maybe with the next Android release (the rumoured Key-Lime Pie), Google will have an answer to Passbook.

PS: It seems that PA1.95 is out! It’s going to be another long night…
If you guys have any thoughts or questions, feel free to leave it in the comments below!

This entry was posted in Uncategorized and tagged android, customization, galaxy, i9100, jelly bean, mobile, review, s2, tech. Bookmark the permalink. Follow any comments here with the RSS feed for this post. Post a comment or leave a trackback: Trackback URL.
« Jelly Bean for I9100 (International Samsung Galaxy SII)
Customization: August 2012 Desktop »